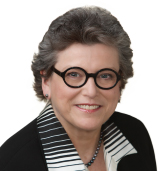 Paula Wilson is the President and Chief Executive Officer of Joint Commission Resources/ Joint Commission International, a subsidiary of the U.S. based Joint Commission. She has held this position since 2010.
Early in her career, Ms. Wilson worked in the public sector when she held several senior positions in New York State during Governor Mario Cuomo’s administration. She also has had extensive experience in the nonprofit health sector working in a large long term care system and for two health policy organizations. Prior to working at Joint Commission Resources, Ms. Wilson was an Associate Professor at Columbia University’s School of International and Public Affairs and also was on the faculty of the New York University’s Wagner School of Public Policy. She has served on several nonprofit boards, including the board of the New York City Health and Hospitals Corporation.
Ms. Wilson is currently an Adjunct Professor at the Business School of the University of Illinois at Chicago. She earned a Masters in Social Work at the State University of New York at Albany.

View a list of all of our previous and upcoming Medical Conferences.