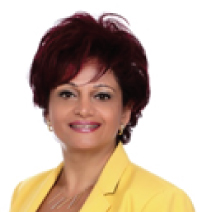 Myrna A. A. Doumit, PhD, MPH, RN, FAAN is a tenured Associate Professor and Assistant Dean at the Lebanese American University (LAU), School of Nursing since 2011. Dr Doumit served as a nursing faculty at AUBSON from 1990-2010.
Dr. Doumit was the first hired full time faculty after the appointment of the founding Dean. Therefore, she played an instrumental role in founding the School of Nursing at LAU.
Dr Doumit’s scholarship reflects her expertise in oncology nursing and palliative care. Her publications shed the light for the first time on many gray areas in the field of oncology in Lebanon that were not explored or discussed. She is a co-founder of an NGO “ Awareness” for breast cancer. Dr Doumit is the director of the community project “Courage against breast cancer”.
Dr. Myrna Doumit is the President of the Order of Nurses in Lebanon (2018-2021) and a Fellow at the American Academy of Nursing. She is also a member on the Lebanese Ministry of Public Health National committees for breast cancer awareness and palliative care and pain. Dr Doumit is a representative of the Lebanese Ministry pf Public Health on the Arab Nursing Council for Health. Elected as vice president for the Arab Board scientific committee for nurses and midwifery. She is also served as the Coordinator of the STTI Middle East region (2015-2017). She is a reviewer for many international nursing journals. Dr Doumit is an IRB member at the Lebanese American University and member of the Groupe de Reflexion sur L’Ethique en Mediterranee (GREM).
Dr Doumit is the recipient of many International awards for her work in the field of breast cancer.

View a list of all of our previous and upcoming Medical Conferences.