Written by the doctors and editors at UpToDate
What is COPD? — COPD is a lung disease that makes it hard to breathe. In people with COPD, the airways (the branching tubes that carry air within the lungs) become narrow and damaged (figure 1). This makes people feel out of breath and tired.
COPD can be a serious illness. It cannot be cured and it usually gets worse over time. But there are treatments that can help.
You might have heard COPD referred to as “chronic bronchitis” or “emphysema.” These are types of COPD.
Why did I get COPD? — The most common cause of COPD is smoking. Smoke can damage the lungs forever and cause COPD.People can also get COPD from breathing in toxic fumes or gases. In rare cases, COPD is caused by a genetic problem. A blood test can check for this.
What are the symptoms of COPD? — At first, COPD often causes no symptoms. As it gets worse it can make you:

People who have COPD are also at increased risk for:

Is there a test for COPD? — Yes. Your doctor or nurse can give you a test called “spirometry” to check for COPD. During spirometry,you take a deep breath and then blow out as fast and hard as you can into a tube. A machine connected to the tube measures how much air you can blow out of your lungs and how fast you can blow
If the results of your spirometry are not normal, you will get a medicine in an inhaler to see if your breathing gets better. Then after a few minutes, you will repeat the spirometry. This will help the doctor or nurse find out if your problem is caused by COPD or another lung problem, such as asthma. People with asthma usually get normal results after they use an inhaler. People with COPD do not.
Will I need other tests? — Your doctor might order other tests, too. These can check to see if other problems besides COPD might be causing your symptoms. They can also look for some of the problems that COPD can lead to. Tests you might get include:

Is there anything I can do to feel better? — Yes. Here are 2 important things you should do:

How is COPD treated? — There are 4 main types of treatment for COPD:

Also rarely, doctors will place small “endobronchial valves” in the damaged airways. This can help the healthier parts of the lungs work better. The valves are placed using a thin tube that goes down your throat, called a “bronchoscope.”
All topics are updated as new evidence becomes available and our peer review process is complete. 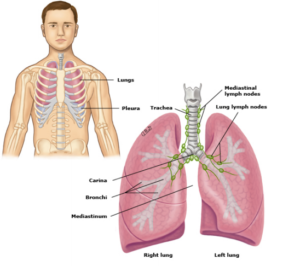 The lungs sit in the chest, inside the ribcage. They are covered with a thin membrane called the “pleura.” The windpipe, or trachea,branches into two smaller airways called the left and right “bronchi.” The space between the lungs is called the “mediastinum.” Lymph nodes are located within and around the lungs and mediastinum.

As a person-centered care hospital, we strongly encourage family and friends to be active members in the care of their loved ones through the participation in the “Care partner program.”

How to Reach the Hospital