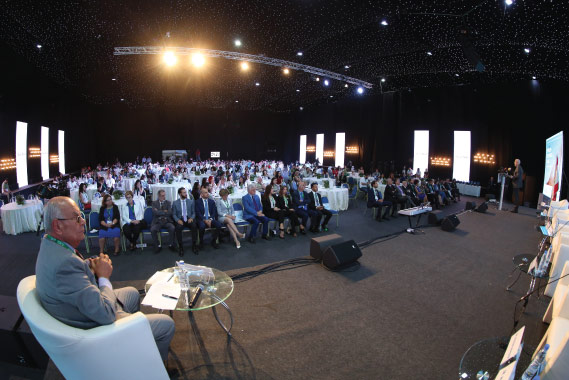 “The Person-Centered Care: A New Healthcare Model”, took place on September 27th and 28th and brought together a slew of national and international healthcare leaders and professionals.

Under the patronage of the Minister of Public Health, represented by the Director General of the Ministry, Dr. Walid Ammar, and in collaboration with the Syndicate of Hospitals in Lebanon, Planetree International and Joint Commission International, Bellevue Medical Center held its first national conference on person-centered care. Titled “The Person-Centered Care: A New Healthcare Model”, the conference took place on September 27th and 28th and brought together a slew of national and international healthcare leaders and professionals.
The opening session of the conference was attended by the Director General of the Ministry of Public Health, Dr. Walid Ammar, the President of the Syndicate of Private Hospitals, Mr. Suleiman Haroun, a representative from the Lebanese Order of Physicians, Dr. Wassim Bitar, and the President of the Order of Nurses, Dr. Myrna Doumit. Additionally, the presence of a number of experts from across the globe was noted, including the President of Planetree International, Dr. Susan Frampton, the President and CEO of Joint Commission International (JCI), Mrs. Paula Wilson, and the CEO and Board Member of Saudi Arabia’s Almoosa Specialist Hospital, Mr. Malik Abdul Aziz Al-Mousa, along with a large crowd of doctors, nurses, specialists and representatives from medical sectors on an local and international scale.

The conference included discussions led by healthcare specialists with the aim to strengthen the model of person-centered care and fully convey its power and importance. The significant improvement the model holds over the general experience of both the patients and the staff in healthcare institutions was highlighted, further expanding on its effects and contributions and the role it plays in achieving higher patient satisfaction and lower readmission rates and healthcare costs.

Dr. Ghassan Maalouf, Vice President of Medical Affairs at Bellevue Medical Center and President of the Scientific Committee of the conference, welcomed the attendees in the opening ceremony and expressed his honor to be at the event, “uniting our efforts in order to provide better conditions for our patients in Lebanon”. He thanked “the Ministry of Public Health, Syndicate of Hospitals in Lebanon, and all hospitals and other partners for their continuous support in promoting the person-centered care model and its application in healthcare centers.” He also shared Bellevue Medical Center’s philosophy, adding that “Bellevue applies international standards that provide patients with high-quality care, love and compassion. Bellevue looks at the patient as a whole, body, mind and soul. Our hospital has received the Gold certification from Planetree International. This approach to care has been very successful, and we hope to see it applied at a national level. ”For his part, Dr. Walid Ammar, Director General of the Ministry of Public Health, addressed the subject of universal coverage of healthcare and people-centered care and gave a technical presentation on the work strategy in the Ministry of Health.The President of the Syndicate of Private Hospitals, Eng. Suleiman Haroun, spoke about the humanization of hospitals and the challenges and opportunities they face, noting that human communication has declined due to difficult working conditions and the increasing number of patients. He talked about the need to restore this communication, pointing out that this matter has several sources, from the ministries concerned and the departments of hospitals that have the duty to spread awareness in the community and among members of the medical body, to the family, which is primarily responsible for giving patients the attention that they need. Haroun said that the Syndicate of Private Hospitals is preparing workshops focusing on the issue of comprehensive human care, in order to restore the human spirit to work in hospitals, which proved to be dynamic and positive in coping with changing circumstances.The opening ceremony concluded with a discussion that united speakers alongside members from the media, moderated by Dr. Nabil Kronfol, Founder of the Lebanese HealthCare Management Association.Dr. Susan Frampton expressed her gratitude and thanked Bellevue Medical Center for organizing this event, congratulating the hospital on an exemplary leadership that was further illustrated throughout the conference by the their efforts to embrace the model and expand on the importance of excellent person-centered care.

Already accredited by the JCI, Bellevue Medical Center was awarded the Planetree International Gold certification in 2017 for its outstanding standards of care. Since its establishment 40 years ago, global non-profit organization Planetree has continued to reward efforts aimed at making healthcare centered on the patient’s needs first and foremost.

Bellevue Medical Center is one of 85 global healthcare institutions that have been awarded the Gold Certification for Excellence in patient-centered care since the program was launched in 2007. It is the first hospital in Lebanon to earn the acclaim and only the second in the Middle East and North Africa.